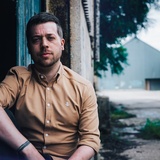 After a few years building his fan base, supporting acts like John Joseph brill and Non Cannon, as well as performing at such festivals as Dot To Dot, Hockley Hustle and Derby Folk Festival, Ben released his debut single is The Girl to critical acclaim, a song which gained a cult like status amongst the Nottinghamshire & Derbyshire music scene.

A few months later saw the release of the singles One Year On, Thanks For The Adventure and the charity single Dog & Parrot, which all received strong praise from fans and critics.

Lockdown brought along a ton of time to write and be creative, therefore Ben is now in the process of putting together his debut album Drinking Games, which will be released July 2021.

Ben's emotive story telling and passionate performances have enabled him to connect with a very attentive audience, gaining him a strong following as he continues to perform and release new music.